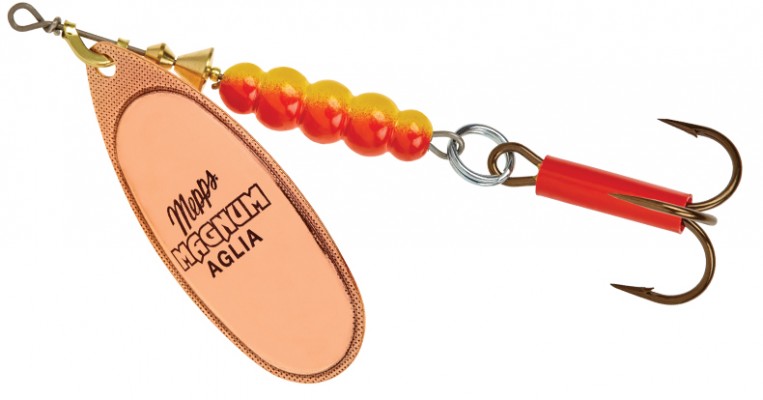 The Mepps Magnum Aglia is perfect for trophy king salmon.

The Mepps Magnum Aglia is a full 125% heavier than our standard #5 Aglia. Everything about it is big, from its 1 1/8 ounce weight to its Magnum #7 blade and heavy duty 3/0 treble hook.

No other spinner stays deep in heavy current and hugs the river bottoms, where trophy salmon hang out, better than the Mepps Magnum Aglia.

I caught five Northern Pike within two hours. All of them were large and gave a great fight. I used the gold version of the Magnum Aglia. Everyone else on the boat was using other lures. They caught nothing. I highly recommend the gold Magnum Aglia for Northern Pike.

I was fishing at Wellers Bay Saturday 07/08/2017 for pike and walleye when I caught a 50 inch musky on a Mepps Comet #5 BRASS. It took probably 1/2 hour to get in his head only fit in my small net . I had to wear him out and finally had his head in the net and grabbed his tail also, to get him in the boat . I don't take my phone with me when I am up there (so I have no picture ) I was shaking with excitement for day's .
janimartjanitorial@gmail.com (Dave )

Magnum Aglia is perfect for